Every year at Christmas time, we hear what the angels announced to the shepherds when Jesus was born. The birth of Jesus meant “peace on earth”. It took many Christmas celebrations and multiple times of reading through the Gospel of Luke, until I understood what this verse really means.

Obviously, “peace on earth” is not referring to peace between nations, or the absence of armed conflicts on earth. Since the earthly life of Jesus, the world has seen numerous wars during the course of history. The previous century, the 20th, was the most bloody of them all because of the two World Wars, and all the terrible atrocities committed in the name of Nazism and Communism.

Neither can “peace of earth” mainly refer to the relationship between individuals, since Jesus Himself said:

What kind of peace did the angels refer to when announcing the birth of Jesus? What kind of war had been going on, that would end because of Jesus’ earthly life and death on the cross? – The war between heaven and all the sin committed on earth!

Throughout the whole Old Testament, we read about how God repeatedly judged sin. The judgment against Sodom and Gomorrah is the most famous example, but there are multiple other examples as well.

This war between God and sin got its final resolution on the cross. Jesus, who knew no sin, was made sin, so that we in Him might become the righteousness of God (2 Cor. 5:21).

Jesus is the “lamb of God that takes away the sins of the world”. When did this happen? Every time we confess our sins before God? No, it has already happened, once and for all – on the cross!

That God’s conflict with sin now is resolved and finalized, is made clear by the following verses:

27 Just as people are destined to die once, and after that to face judgment, 28 so Christ was sacrificed once to take away the sins of many; and he will appear a second time, not to bear sin, but to bring salvation to those who are waiting for him.(Heb. 9:27-28, NIV)

Because of the cross there is now a state of peace between heaven and earth!

19 For God was pleased to have all his fullness dwell in him, 20 and through him to reconcile to himself all things, whether things on earth or things in heaven, by making peace through his blood, shed on the cross. (Col. 1:19-20)

God do not hold people’s sins against them!

”that is, that God was in Christ reconciling the world to Himself, not imputing their trespasses to them, and has committed to us the word of reconciliation”. (2 Cor. 5:19)

Before the cross, God judged sin from time to time. However, on the cross, God’s judgment of sin was finalized since all judgment fell on Jesus Christ!

“…The chastisement for our peace was upon Him, and by His stripeswe are healed”. (Is. 53:5)

“Peace on earth” and “goodwill toward men” is thus the result of that Jesus died for the sins of the world on the cross. Because of the finished work of Jesus, goodwill from God now flows out to all men – believers as well as unbelievers.

In other words: God is not angry or mad. He is glad. The war is over!

“Speak comfort to Jerusalem, and cry out to her, that her warfare is ended, that her iniquity is pardoned; For she has received from the Lord’s handdouble for all her sins.” (Is. 40:2)

Is this the Gospel the church has been preaching to the world? Or have we preached a polluted and legalistic Gospel? The great Canadian preacher Oswald J. Smith said: “We talk of the Second Coming; half the world has never heard of the first.”

Not until the true Gospel has been preached as a testimony to all nations (ethnic groups), the end will come (Mt. 24:14). 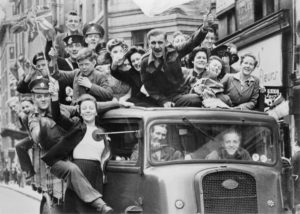